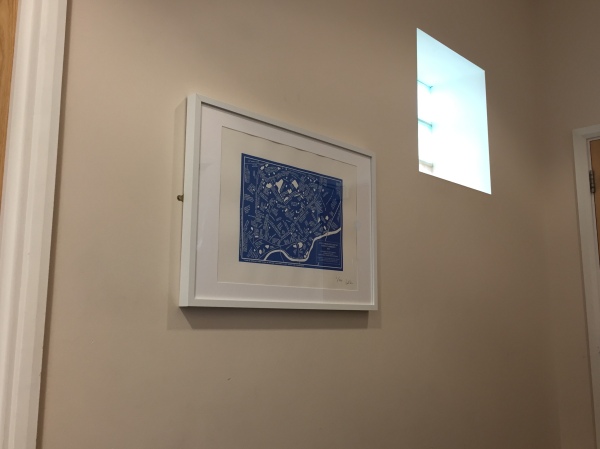 The map, which was created by artist in residence Isabella Martin as part of her You Are Here project, has been installed by Kettles Yard this afternoon at the Orchard Community Centre. Go along and have a look. See if you can see Orchard Park and how it has been represented by local people. The map is interesting, funny and informative. We’ve got plans for the wildlife tiles which were also created at our event with Kettles Yard artists at the Orchard as part of the project. Watch this space. Many thanks to all at Kettles Yard, we enjoyed working with you.

For more information on the project which culminated in the map, tiles and wider exhibition see: Lush, Art, Apples, Wildlife Maps, & Bats.

See Orchard Park’s Wildlife captured on your hand decorated tiles, in the follow up exhibition

Orchard Park’s Wildlife as part of “You Are Here” Exhibition 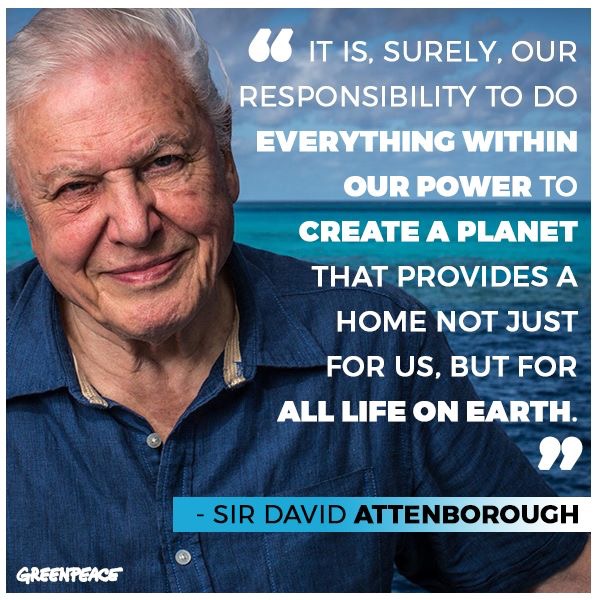 Due to unplanned but necessary travel in December, unfortunately the activity we had planned didn’t happen. Many thanks indeed to all we collaborated with in 2016 to put events on, to Lush and Inder’s Kitchen for funding us, to OP Community Council and South Cambridgeshire District Council for their support, and to everyone who came to events and took action to help wildlife. We will be drafting our activity plan for 2017 early next year, we are looking at forging new links with existing groups. Having heard him speak in the Summer in the university building named after him, I’ll leave the last word of 2016 to David Attenborough …… 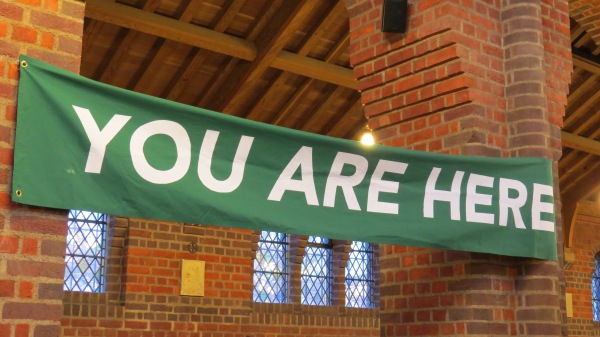 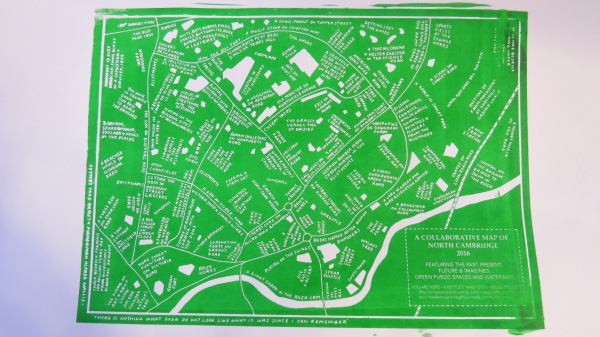 It was a pleasure to see the depictions of Orchard Park’s wildlife on tiles, and all the other colourful exhibits, at the “You Are Here” exhibition by North Cambridge Artist in Residence Isabella Martin. Various artistic sessions in the North Cambridge area culminated in the Exhibition held on Friday and Saturday at the Church of the Good Shepherd off Arbury Road. For more details click: “You Are Here“. Last month Karen Thomas from Kettle’s Yard and artist Rosanna Martin came to oversee our artistic endeavours at our event in OP’s Orchard.

I attempted to photograph each and every wildlife tile shown at the exhibition – can you spot yours? They’re in the slideshow above, you can hit the ‘pause’ button when you get to your tile so you can take a longer look. We plan to ‘release the tiles into the wild’ – details will follow on the blog when we’ve finalised the plans, we’d like everyone to know where their tiles go.

I was particularly pleased to see Orchard Park on the Collaborative Map of North Cambridge (see the second photo above), created at the workshops across the area, represented entirely by wildlife we’ve found here. It’s such a positive way to portray our community. Up to 250 people attending the exhibition were able to print their own copy of the map. The map is informative, amusing, and pleasing to the eye, and I look forward to putting the 202nd print on my wall. You can click on the photo of the map to see it as a bigger image – of course, OP is top left.

Many thanks indeed to Isabella, Rosanna and Karen – we really enjoyed working with you, and we hope you enjoyed making your wildlife tiles. 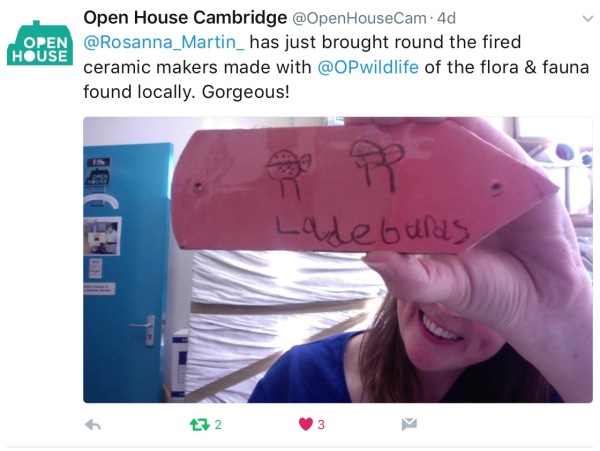 Does anyone recognise this tile? Looking forward to seeing all of them at the event 🙂 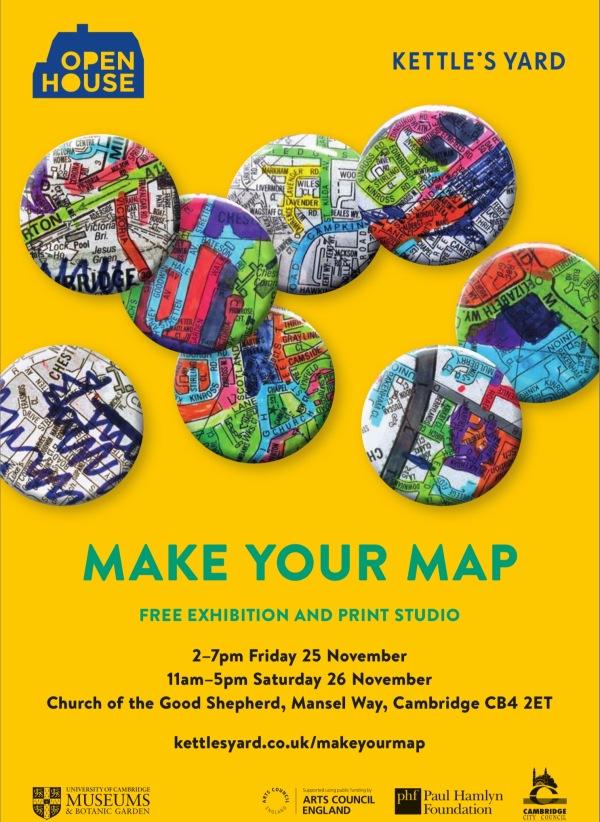 We enjoyed our afternoon making tiles with Kettle’s Yard artists capturing the wildlife of our Orchard and Orchard Park more widely. We hope you did too. The tiles have now been fired and will soon be available to view as part of an exhibition. You can also make a print of our north Cambridge map. Do go along to see and take part 🙂

“As you will know, our 2016 Artist in Residence, Isabella Martin, and her supporting team of artists have been working with local groups and residents for the past nine months, gathering information for a new map.

We are delighted to tell you that the map is nearing completion and hope that you will be able to join Isabella at a temporary print studio where you can screen print your own copy of the map.

Isabella will be setting up a temporary print studio at Church of the Good Shepherd on Friday 25th November, 2pm – 7pm and Saturday 26th November, 11am – 5pm. This will be accompanied by an exhibition featuring artworks made by local residents and community groups during the residency and works from the Kettle’s Yard Collection.

We would like to invite all our Open House partners and project participants to a special celebration on Friday 25th November 5 – 7pm at the print studio. Please do pass this invitation on to participants.

Hope to see you soon!” 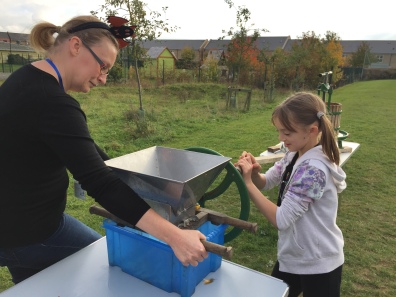 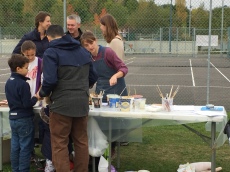 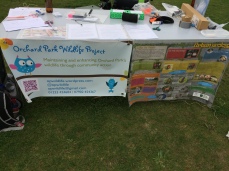 We had a great time on Saturday afternoon with Kettle’s Yard celebrating our orchard and its wildlife. Our tiny ‘Spartan’ apples are very cute. If we feed the trees and ensure they’re looked after properly we may be rewarded with larger crops in the future. Many thanks to Kate, Scott, Giovanna, and two Andrews for between them buying, washing, chopping, macerating and pressing apples, so we could appreciate fresh juice, and dealing with all the tidying up! Thanks are also due to Histon and Impington Community Orchard Project for lending us their equipment.

Many children enjoyed decorating tiles, with Karen Thomas from Kettle’s Yard and artist Rosanna Martin, to depict some of the 200 different types of animals and plants we’ve identified so far in the orchard and around Orchard Park. They will be fired and placed around Orchard Park as part of artist Isabella Martin’s ‘You Are Here’ project whilst she is artist in residence for North Cambridge. Thanks for letting us look at our wildlife through an artistic lens, and we look forward to the next phase 🙂 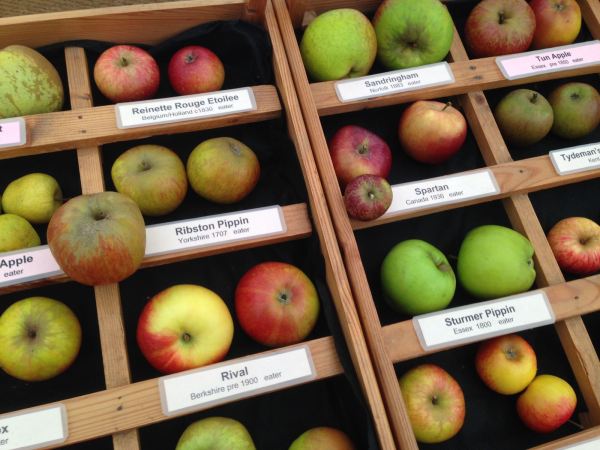 Many thanks to Kate from OPWP for going to Cambridge University Botanic Garden’s Apple Day today to identify the variety of apples in Orchard Park. We now know around OP we have the Ribston Pippin and the Spartan, both eating apples. We hope you’ll join us at our event on 29th October 1-4pm with Kettle’s Yard, and Inder’s Kitchen to celebrate our Orchard and its wildlife. Juicing, chutney making, and OP’s Orchard Wildlife, free, fun, informative and accessible. For details see: Next event at the Orchard – Saturday 29 October 2016 1-4pm

“Ribston Pippin originated in Yorkshire, England, around 1700 as a dessert apple, and was grown from three apple pips (seeds) sent from Normandy to Sir Henry Goodricke of Ribston Hall at Knaresborough, in Yorkshire, in 1709. Only one seed germinated and matured. The original tree was blown down in 1810, but was propped up and lived until 1928. This is a highly esteemed Victorian dessert apple. Ribston Pippin is also referred to as the Glory of York. Juicy, firm deep cream-colored flesh has an intense, rich, aromatic apple flavor, along with an intense sharpness. Skin striped red over greenish-yellow, with russet patches. Parent of the famous Cox’s Orange Pippin. Consider Grimes Golden, Liberty and/or White Pearmain for pollination. Triploid.”

The provenance of the Spartan is less well understood. The Garden Action website says:

“This variety was purpose bred in Canada for commercial use. Remarkably even though the apples were bred under controlled conditions, the parentage is not known. Originally the apple was thought to be cross between McIntosh and Newton. Now however, genetic testing has proved that Newton was not one of the parents. McIntosh, yes, Newton definitely not!….

The apple flesh is white and crispy with lots of juice if eaten straight off the tree.”

Our next event will be in the Orchard, behind the sports ground on Ring Fort Rd (see map) on Saturday 29th October 2016 1-4pm. We’ll be working with artists from Kettle’s Yard to explore our place and wildlife.

Create your own ceramic signs which celebrate the amazing variety of apples growing Orchard Park.  The signs and labels will be left in the Orchard area permanently to help visitor identify the apples growing and find out about them. They will also form part of You Are Here, a new map of North Cambridge being created by Open House artist in residence, Isabella Martin.

We’ll have an apple press on loan from Histon and Impington Community Orchard Project and Inder’s Kitchen will be there making apple chutney.